A few months ago our frontend team encountered difficulties during work with the client’s remote backend team. Two groups of people who cannot directly communicate with each other and frequent API changes led to a downturn of the project’s development.

The API updates were frequent, and because of lack of communication, we were not aware of them until performing checks of the whole business flow.

We’ve lost trust to the API and noticed that we should’ve started the development with something that would ensure us that both producer and consumer sides use the same API.

The question was: How do we know that we implement the same API? which led us to another question: Can we be sure that our test mocks behave like the real REST API?.

We decided to dig into it and try to do something to be sure that we have a comprehensive answer to these questions.

Commonly End-to-End tests (E2E) are considered as tests which side effect is that we know that the APIs on the frontend and backend side are not consistent. The problem is they don’t strictly say that the problem is API inconsistency. Their main task is to check the flow of the usage, not the API itself. They also take time. It’s hassle to set up the whole context and run E2E tests to check if the API is implemented properly.

The one to rule them all

Backend tests don’t need a whole context of the application set up. They only require endpoints and the stubs of injected services methods.

On the other hand frontend tests are just unit tests with stubs of the backend service endpoints.

I’m gonna make him an offer he can’t refuse

How does look consumer-driven contracts development? The frontend and backend developer create an agreement how the API should look like in the form of the contract file. The basic idea is the contract is being written as a part of consumer tests. It’s worth noting that contract defines minimal set of request/response fields that should be present during the communication so if you add new fields they won’t break the contract.

PACT aids developers to achieve this. The major advantage is it’s well supported by Angular, and it’s contract files, which are contract base for generating producer tests, can be shared with JVM application.

Sharing pacts between consumers and producer

PACT provides a solution to store the contract files called PACT Broker. It is a repository for publishing and retrieving pacts with REST API.

Unfortunately, we had no time to work with another new repository, so we decided to prepare a simple flow on Jenkins and share pacts over git repository instead of running broker.

The following diagram shows our concept of sharing pacts without the broker:

Spring Cloud Contract is a set of tools that supports consumer-driven contracts in Spring applications. The project is focused on the custom DSL solution, fortunately, they also provide support for PACTs, so we are able to work together with non-JVM consumer-like Angular frontend application flawlessly.

Our task was to implement the API for sending a simple message and returning the id of the message. The given contract looks as below:

Let’s assume that generated pact is already in the producer’s repository src/test/resources/pacts/messaging.json

We need to add dependencies and enable a gradle plugin:

After that, we need to configure contracts section in gradle which is used to generate tests:

Base class for tests

We need to implement base class for tests. It stores information about test definitions we want to run and defines service method stubs.

You may notice that:

Here is your generated test class!

Contract tests are based on response types, not particular values (they don’t test the logic). That’s why the generated tests check value types instead of values.

Try to run your tests:

As you see the test fails: 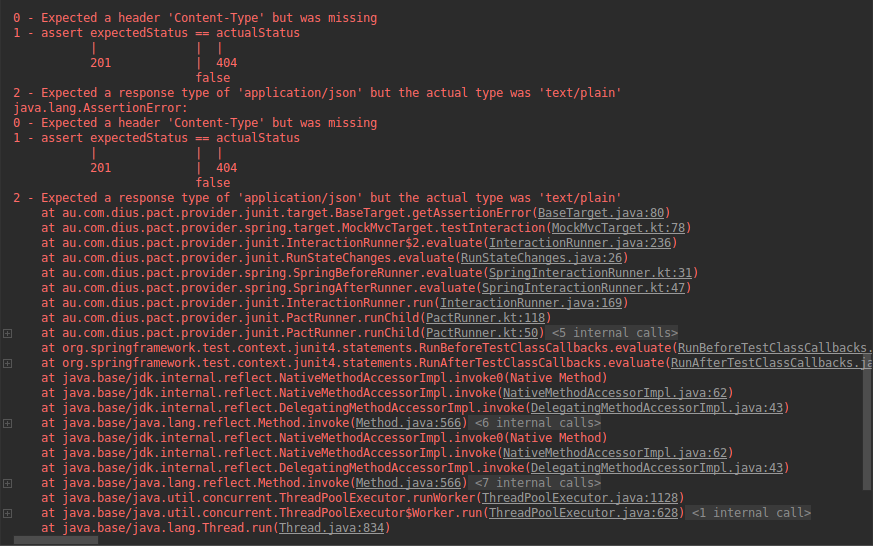 Description explains with details that the:

We need to create MessageController:

Of course you need to create also classes:

You don’t need to create any logic in MessageSender just return some UUID. In fact, for tutorial purposes, we will just care about its method stub.

Do not forget to stub the service method:

Now if you run:

You will see the test passed:

What have we gained?

Our problem was the API inconsistency. By using contract tests we get rid of the hassle and time-consuming E2E tests. The important thing is the backend developers must be aware that if they break the contract by i.e. changing the type of a field the test will fail. On the other hand, if frontend developers need a new endpoint or modify the old data format, they need to prepare a new contract.

Would you like to talk with our experts about technology solutions for your business?

GET A FREE IT CONSULTATION
Top